Groppers and other early migrants 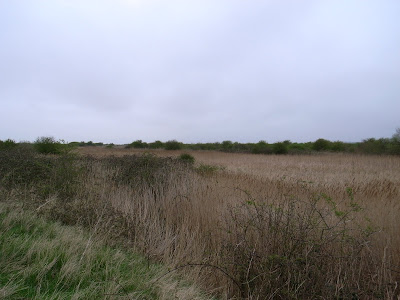 Spent most of a grey Easter Saturday with the family, so by about 5.30 pm I was ready for a fix of fresh air and birds. As I was going to pass Snettisham on my way back from King's Lynn, I gave my mate Jim a call to see if he fancied coming out to play for an hour. He couldn't, but he did say he'd had a few good birds down the Coastal Park recently including an Alpine Swift earlier in the week.

The large car park was almost empty when I arrived just a few dog walkers braving the chilly grey evening. Heading into the scrub almost the first bird I heard was a Grasshopper Warbler reeling away from an area of reed and brambles. Standing here for a few minutes I was also able to hear Chiff-Chaff, Willow Warbler and Sedge Warbler. Great, but where were they, hard as I tried even the Sedge Warbler normally a bit of an exhibitionist kept its head down and carried on its improvised Jazz routine from deep in the cover of a clump of Brambles.

Walking on skeins of Pink Footed Geese numbering perhaps a couple of hundred birds flew overhead and onto Ken Hill Marshes on the other side of the river and a second Gropper sang from a patch of scrub in the middle of a wet reedy area.

With the light going and no sign of the setting sun being able to break through the blanket of grey cloud I headed back to the car skirting the piles of dog turds as I went.