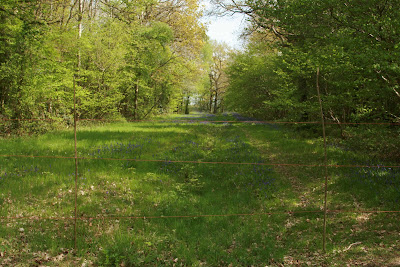 NWT Foxley Wood, Bluebell Fence
May has been a poor month for me. It started badly with one of the worst colds that I can remember, going round the office and my family and just as I recovered from that the wind got stuck in the north and we have shivered through most of the month. So it was a joy to get out in the sunshine with the family today and visit the Norfolk Wildlife Trusts Foxley Wood nature reserve to see a few Bluebells.
It had been a few years since we last visited late on a spring afternoon, then we were greeted with a sign that explained that the reserve shut at 5pm and that we and our car would be locked in after that time. The sign was still there along with a more welcome one pointing out the direction to go for the Foxley Wood Bluebell trail. Reassured that we would be directed to the best part of this large wood for Bluebells we set off pushing the pram in four wheel drive mode and toting a restrained amount of camera gear.
It was great to hear even quite late in the morning [you can't access the site before 9 am or on a Thursday, Why?] a great deal of bird song including Blackcap, Garden Warbler Chiff-Chaff, Willow Warbler and Turtle Dove. At the first junction it become apparent that the only helpful Bluebell Trail signs were in the car park and from here on in we would just have to explore the wood by following our noses, something I enjoy doing normally but by now I had raised expectations of being taken to the best Bluebell areas of the wood.
After a pleasant half hour stroll in which the Little Fella pointed out lots of trees and a Ladybird [a talented naturalist at thirteen months] we finally came to a patch of Bluebells which we were excluded from going anywhere near by a temporary fence. There was no interpretation by this barrier to explain why it had been erected and I came away with the impression that it was there purely to keep visitors to the woods away from the Bluebells that they had come to see.
All in all our visit seemed a great example of how through careless signage and a antagonistic approach to the visitor experience, an organisation was able to put a gap in a visitors mind between the enjoyable parts of our visit and its role in providing them. Very frustrating.
An afternoon visit on my own to RSPB Titchwell Marsh had a very different feel to it. A special event was being held attempting to see how many species could be seen on the reserve in one day [the list stood at 113 species in mid afternoon] and there were wardens and volunteers positioned along the West Bank path to point out birds if you wanted them to. This was both fun and really helpful and enabled me to see the two Wood Sandpipers and two Temminks Stints which skulked half hidden on the Fresh Marsh. These along with Little Terns and Common Terns and a warm sun on my back gave the reserve a real feel of summer and the helpful wardens and signage gave it a real welcoming feel.
Posted by Bullofthe Bog at 21:24