Been feeling a bit pre-occupied of late and so it was great to be able to get out for an hour and a half this afternoon and spend sometime on my own at Thornham Harbour. I chose to visit Thornham because I figured it would be less buy than many other spots on the coast and that I'd hopefully jam into either the wintering flock of Twite or perhaps a Hen Harrier.

Almost as soon as I got out of the car I heard the distinctive sound of a small flock of Twite flying around in a bouncing flock low over the saltmarsh. They quickly settled and I was able to get good scope views. Although a little flighty I was with patience able to get some great scope views and these showed a number of birds wearing colour rings, I didn't have time today to note these down.

My digi-scoping kit is a little archaic a quarter century plus Nikon ED Spotting Scope and Panasonic Lumix TZ30 camera that I set to macro zoom. In the low winter light this afternoon I really struggled to get any usable shots, by upping the ISO I could freeze the action but at the cost of some very grainy images. I got one shot that was slightly better than the rest and I have copied this below. 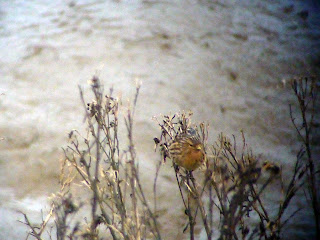 A couple  stopped and asked what the flock of small brown birds I was looking at were and I explained they were Twite a species they'd never heard of, but a look through the scope had them drawing comparison with Buntings and Finches that they did know.

I realised that I had lost track of time and I wasn't even sure if I had my phone with me or if I did which pocket it was in. My visit had worked I'd got into the zone of birding and digiscoping and for an hour or so not thought about the things that had been weighing on my mind. Just what the doctor might have ordered.

Thornham Harbour and its surrounding saltings looked great, a real classic north Norfolk winter scene with large number of loafing gulls on the exposed beach intermingled with Brent Geese, the browns of the the saltings varying from almost bronze ands gold to dark muddy brown and the old coal barn and fishing boats showing the influence of man on this landscape. In the distance towards Titchwell I could see a Barn Owl hunting on raised cream wings over the swaying washed out heads of last summers reeds. Time to go home.
Posted by Bullofthe Bog at 21:05