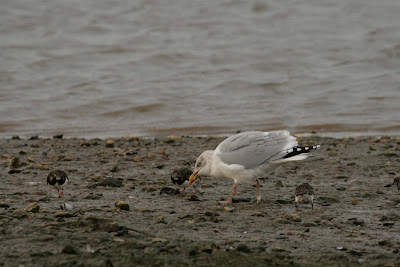 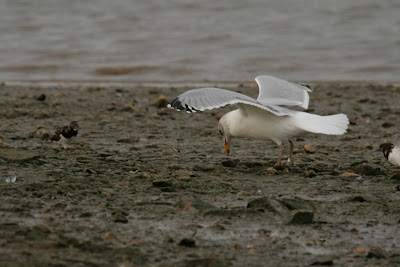 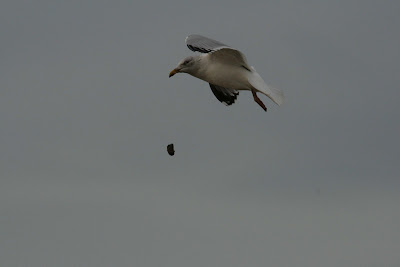 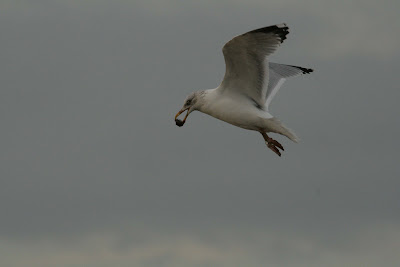 Nice piece of behaviour this, one which I have seen Herring and Common Gulls exhibit on Hunstanton Beach, at Brancaster Staithe and at Burnham Overy Staithe. The gulls collect mussels which they are unable to open with their beaks and drop them from 10 to 50 feet onto a hard surface. They seem to 'know' where to drop the mussels and where not to bother. They may have to do this up to half a dozen times before opening the mussel, this looks pretty energy efficient as the birds natural buoyancy lifts them easily into the air. In Brancaster Staithe Harbour the gulls have the advantage that the Shell fishermen sort their crop in the harbour and there is a plentiful supply of mussels for them to feed on. A nice twist in the story is that the local Turnstones have learnt to anticipate this behaviour and will scurry to the dropped mussels in the hope of getting a mouthful of food before the gulls get to them.
I've still not got a sequence of pictures that I am happy with showing all of this behaviour but here are some I took today. Some years ago of course Roger Tidman won the BB Bird Photographer of the Year competition with a picture of a north Norfolk Herring Gull doing just this.
Whilst taking these shots I had a fly by Kingfisher and a ringtail Hen Harrier pass through the harbour.