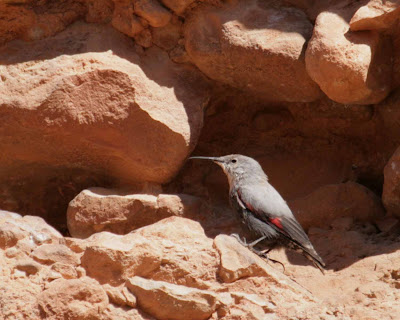 Up at Sparrows and on site at El Planeron SEO reserve by 6.30 am. Quite a blowy morning but we heard the first Dupont's Lark squeaky gate song in the pre dawn at 7.05 am. Really atmospheric just the wind, the Dupont's Lark song and a velvet blue glow in the horizon. As it got lighter the dawn chorus was joined by Short Toed, Calandra and Crested Larks. After about three hours trying we managed a brief scope view of a Duponts. Also saw a pair of Southern Grey Shrikes here and Black Bellied Sandgrouse.

On our way north we stopped at the Lomara reserve for lunch and had great views of a low flying Golden Eagle. We continued our way north via Embalse's Sotonera and Ardissa but in the high wind these were pretty birdless.

The hour and a half that we spent at Riglos was one of the best of the trip. As we walked through the village towards the church we had great close views of two Alpine Accentors. Once under the cliffs we had good views of two Wallcreepers including one very low down eatinga caterpillar. Other graet birds here included a stunning male Black Redstart, a Blue Rock Thrush, Peregrine and a steady fly by of Griffons.

Next stop the Monastery at San Juan De La Pena. The meadow and car park here were carpeted in snow but we had good views of a Black Woodpecker in the vicinity of the Aspen tree I had seen it nesting in last spring. A singing male Crossbill added to the atmosphere.

As we drove down the hill we saw Lammergeir and Peregrine. We got a room for two nights at the Hostal Santa Cruz in Santa Cruz de la Seros.
Posted by Bullofthe Bog at 13:50