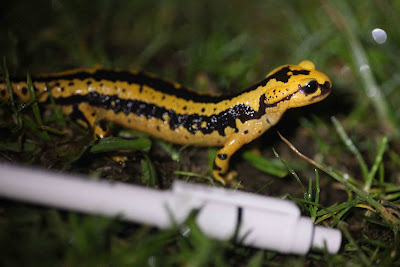 Before I got into birds I was into Amphibians. As a kid I used to love exploring marshy corners and ponds in search of frogs and newts. Finding these was no mean feat in the concreted over corner of north London where I grew up, but find them I did. I've never lost this love of searching for Herps and on the rare occasions these days that I manage to get somewhere with a less impoverished Reptile and Amphibian than population than the UK's I enjoy the challenge of finding, identifying and photographing the local Herps.

I had a chance to do just this recently on a two week family holiday to the Asturias region of northern Spain [we stayed at http://www.holiday-rentals.co.uk/p224154 ]. The big draw here was Fire Salamander, an amphibian that I had never seen in the wild and which I was told occurred in good numbers around the farm buildings 'after rain'.

So for the first week of our stay I patrolled the bone dry gardens and fields around the farm by torchlight in a fruitless search for Fire Salamanders, turning over every movable stone, log, plank and piece of plastic in the hope of finding a hiding beast. Then it rained and rained some more and out came an army of slugs and snails. But still on my first torchlit circuit no Fire Salamanders. Then half way through my second damp walk round the grounds, just as I was resigning myself to never seeing one of these little black and gold gems, there one was in my torch beam in the middle of the grassy path.

I got down on my hands and knees to get a closer look and to take its photo and spent a happy ten minutes in its company. When I got back to the buildings Fire Salamanders seemed to be everywhere and I watched bemused as two squeezed out of a narrow gap [narrow even for a Salamander] between the stone steps and wall of one of the outbuildings. For the next two or three nights I encountered Salamanders on my nightly patrols, enjoying their company to the sound of cow bells and churring nightjars as a light rain fell on my back.

These Salamanders were of the Asturian race Salamandra salamandra bernardezi which tend to be smaller than other European Fire Salamanders and have adapted to giving birth to a handful of live young.

I was asked by our helpful host Lynn, whether they were poisonous to people and I still think my gut instinct that they would only cause you harm if you rubbed their mucus in your eyes or mouth [an unlikely scenario] is true, I can though find very little online about their toxicology.

Lynn felt that numbers had perhaps declined around the farm and certainly elsewhere on the mountain where chemicals were used on the land and I suspect this allied to the stands of Eucalyptus and Pine where once there would have been native deciduous forest has probably reduced their numbers.