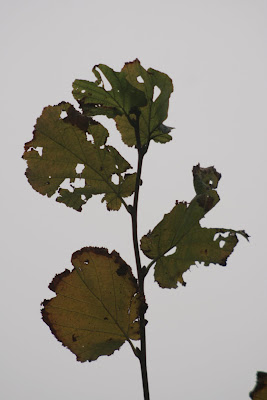 A grey and gloomy day. To get some fresh air had a walk around Courtyard Farm near Ringstead in the afternoon. Not much in the way of photo opportunities in the poor light but I did like the patterns of decay in this leaf and the way that I could use the milky sky as a backdrop.
After leaving Courtyard Farm I popped down to Brancaster Staithe for the last 30 to 40 minutes of dusk. Too dark to take photos by then, but some nice birds were present. A ringtail Hen Harrier twice came through the harbour putting up flocks of waders and wildfowl in its wake. In between the harriers' patrols a Sparrowhawk shot through low and at speed also spooking the other birds. Then just before I left a Kingfisher flashed by. Not a bad half hours spotting in low light.
Posted by Bullofthe Bog at 19:53